Created 15-Apr-17
59 photos
The Palais des Papes (English: Papal palace, lo Palais dei Papas in Occitan) is a historical palace in Avignon, southern France, one of the largest and most important medieval Gothic buildings in Europe. Once a fortress and palace, the papal residence was the seat of Western Christianity during the 14th century. Six papal conclaves were held in the Palais, leading to the elections of Benedict XII in 1334, Clement VI in 1342, Innocent VI in 1352, Urban V in 1362, Gregory XI in 1370 and Antipope Benedict XIII in 1394.
The Palais is actually two joined buildings: the old palais of Benedict XII, which sits on the impregnable rock of Doms, and the new palais of Clement VI, the most extravagant of the Avignon popes. Together they form the largest Gothic building of the Middle Ages, it is also one of the best examples of the International Gothic architectural style. The construction design was the work of two of France’s best architects, Pierre Peysson and Jean du Louvres and the lavish ornamentation was the work of two of the best students of the School of Siena (Italy), Simone Martini and Matteo Giovanetti.
In addition, the papal library housed in the Palais (the largest in Europe at the time with over 2,000 volumes), attracted a group of clerics passionate in the study of "belle-lettres", amongst them the founder of Humanism, Petrarch. At the same time, composers, singers and musicians were drawn to the Great Chapel of the Palais. It was there that Clement VI appreciated the Mass of Notre-Dame of Guillaume de Machaut, there that Philippe de Vitry at the pope’s invitation presented his Ars Nova and there that Johannes Ciconia came to study.
Due to its immense size, the Palais was also the place where the general organisation of the Church began to change. It facilitated the centralisation of services and the adaption of operations in order to suit the needs of the papacy, creating a truly central administration for the Church. The manpower of the Curia (Church administration), while 200 at the end of the 13th century, surpassed 300 at the beginning of the 14th century and reached 500 people in 1316. To this were added over 1,000 lay officials working within the Palais.
Despite this, the Palais became obsolete when the papacy found it necessary to return to Rome. The hope of reuniting Latin and Orthodox Christians, along with the achievement of peace in the Papal States in Italy, made the case of returning stronger. Added to that was the strong conviction of both Urban V and Gregory XI that the seat of the papacy could only be the tomb of St Peter. Despite strong opposition from the Court of France and the College of Cardinals, both popes found the means to return to Rome, the first, on 30 April 1362, the second on 13 September 1370. This time, the return was absolute.
In the following centuries, the Palais lost all of its former glory, despite it serving as the seat of two anti-popes and many cardinals. It retained, however, a “work of destruction” aspect that French poets and writers such as Charles Forbes René de Montalembert have referred to over the centuries, with its powerful sense of beauty, simplicity, grandeur and immortality.
Since 1995, the Palais des Papes has been classified, along with the historic center of Avignon, as a UNESCO World Heritage Site. 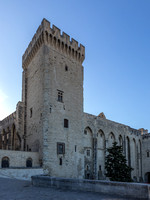 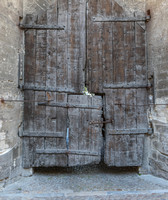