37 photos
St Dominic's monastery is a former Dominican monastery in Santiago de Compostela, Galicia, Spain.
The complex includes architecture in various styles including work by the Galician Baroque architect Domingo de Andrade. It was declared a national monument in 1912.

The church, built in Gothic and Renaissance style, is not currently open for worship. It houses the Pantheon of Illustrious Galicians and is a concert venue. It was built according to the canons of Gothic naves Dominican with light and airy, with the focus of services moved from the apse towards the pulpit located in the crossing. In this temple were buried the noble families of Moscoso and Castro, through the authorization of Pope Innocent IV, who gave the Dominican Order permission to bury lay people in their convents. The temple is completely covered with vaults.
The altarpiece was built from 1687 by Domingo de Andrade in the parish church of Santiago de Carril, and after being mounted in its final position was not maintained the original structure. The base is clearly Renaissance, with overlapping bodies. The sculpture was commissioned toward 1689 by sculptor Stephen of Cendón, related to the style of Matthew de Prado . Represent San Francisco, San Augustine, San Benito, San Ignacio, San Pedro de Nolasco and Santo Domingo. Today's sculptures are scattered convent idle different places.

The monastery church in a side chapel houses the Pantheon of Illustrious Galicians, in Galician Panteón de Galegos Ilustres, where the remains of several key Galician cultural and political personalities such as writers: Rosalia de Castro, Alfredo Brañas, Ramón Cabanillas, the intellectual and cartographer Domingo Fontan, the sculptor Francisco Asorey, The last person buried in this mausoleum is the politician, writer and artist Alfonso Daniel Rodríguez Castelao, and considered the father of modern Galician identity, resting there since 1984.

Inside the convent stands the extraordinary triple helical staircase of the seventeenth and eighteenth centuries, the work also the architect Domingo de Andrade. It consists of three separate coils. Professor Rios Miramontes related it to that found in the Castle of Chambord, in France. In the same space extend three separate ramps that lead to different rooms, only one of them comes to the viewpoint. The rungs of the ladder are made of a whole piece, set in an outer rib fit without joining the wall or each other. It was restored by Xosé Cerviño Garcia, Master Cerviño. 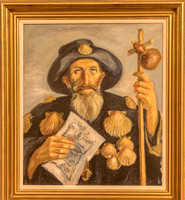