25 photos
The Old Cathedral of Coimbra (Portuguese: Sé Velha de Coimbra) is one of the most important Romanesque Roman Catholic buildings in Portugal. Construction of the Sé Velha began some time after the Battle of Ourique (1139), when Count Afonso Henriques declared himself King of Portugal and chose Coimbra as capital. The first Count of Coimbra, the Mozarab Sisnando Davides, is buried in the cathedral.
From the outside, Coimbra's old cathedral looks like a small fortress, with its high, crenellated walls harbouring few, narrow windows. This menacing appearance is explained by the belligerent times in which it was built. There is a tower-like structure in the middle of the western façade with a portal and a similar-looking upper window. Both portal and window are heavily decorated with Romanesque motifs of Arabic and Pre-romanesque influences. The façade is reinforced by thick buttresses at the corners that compensate for the angle of the terrain (the cathedral was built on the slope of a hill).
The north façade has a remarkable, although eroded, Renaissance-style portal called the Porta Especiosa. The three-storey portal was built in the 1530s by French sculptor João de Ruão (Jean of Rouen). From the east side one can see the semicircular apse with its three radiating chapels, the main and the northern chapels are still Romanesque while the southern one has been rebuilt in Renaissance times. Over the transept there is a Romanesque lantern-tower with some Baroque details.
The interior of the cathedral has a nave with two aisles, a small transept, and an eastern apse with three chapels. The nave is covered by barrel vaulting and the lateral aisles by groin vaults. The nave has an upper storey, a spacious triforium (arched gallery), that could accommodate more mass attendants in the tribunes if needed. All columns of the interior have decorated capitals, mainly with vegetable motifs, but also with animals and geometric patterns. The windows of the lantern-tower and the big window in the west facade are the main sources of natural light of the cathedral.
The cloister, built during the reign of Alfonso II (early 13th century), is a work of the transition between Romanesque and Gothic. Each of the Gothic pointed arches that face the courtyard encompass two twin round arches in Romanesque style.
The cathedral is a major stop for pilgrims on the Portuguese Way, on their pilgrimage to Santiago de Compostela on the camino de Santiago. 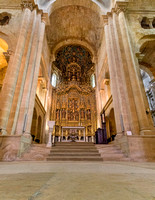