Created 15-Apr-17
27 photos
The so-called classic way (though not the oldest) to produce sparkling wine is popularly known as the Champagne method or méthode classique which is the official EU designation. Formerly, the designation was méthode champenoise but this designation is no longer permitted, as it involves a certain amount of renomée passing off. As the former designation suggests, the method is used for the production of most Champagne, and it is slightly more expensive than the Charmat method. Champagne in bottles of 375 ml, 750 ml and 1.5 liters must be produced with the traditional method, but smaller and larger bottles are usually produced with the transfer method.
The wine is fermented once on the barrel and then undergoes a second fermentation in the bottle after the addition of yeast, nutrients for the yeast, and sugar (known as tirage). The second fermentation results in a natural sparkling wine. Yeast precipitate (lees) must then be removed. This begins with riddling (remuage in French) which means that the bottles are turned with the neck downwards and lightly shaken to move the lees to the neck of the bottle. This is done in small steps where the bottle orientation gradually changes. Finally the inverted bottle necks are cooled so that the precipitation freezes to a small block of ice, the bottles are turned upright and the temporary closure (normally a crown cap) is opened so that the precipitate is pushed out by the pressure in the bottle. Then the bottle is filled to replace the missing volume, and fitted with a plain Champagne cork and halter. The process to remove lees is called disgorging.
Historically the various stages were performed manually but the whole process is now automated for most wines. In connection with the filling of the missing volume, it is common to add a certain amount of sugar dissolved in wine to give the sparkling wine a smoother taste. Sugar addition is called dosage and the added liquid liqueur d'expedition.
In many cases the wine is stored on the lees – sur lie – under carbon dioxide pressure for a long time before disgorging takes place, to get a more mature character. The requirement for non-vintage Champagne is at least 15 months of storage on the lees, and for vintage Champagne at least three years.
The traditional method is used for Champagne, all European wines with the designation Crémant, Cava, better varieties of Sekt and other sparkling wines that have names such as méthode classique or fermented in this bottle on the label (note, however, that the unusual ancestral and dioise methods also ferment the wine exclusively in the bottle). 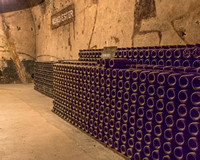