Created 5-Mar-17
85 photos
Le Puy Cathedral (Cathédrale Notre-Dame du Puy) is a Roman Catholic cathedral, and a national monument of France, in Le Puy-en-Velay, Auvergne. It has been a centre of pilgrimage in its own right since before the time of Charlemagne, as well as forming part of the pilgrimage route to Santiago de Compostela. Since 1998 it has been part of a multi-location UNESCO World Heritage Site along France's Santiago pilgrimage routes.
It is the seat of the Bishop of Le Puy.
The cathedral became very early on a centre of the cult of Our Lady and a place of pilgrimage—Charlemagne made the pilgrimage to Le Puy twice—which brought it great wealth and influence. Its treasures escaped the ravages of war repeatedly over the centuries until the French Revolution, when all were destroyed, including the ebony statue of Our Lady of Le Puy which had been a gift of Saint Louis.
Pilgrims starting their journey to Santiago de Compostela gather to be blessed each morning. The cathedral has been a UNESCO World Heritage Site since 1998, as part of the "Routes of Santiago de Compostela in France". 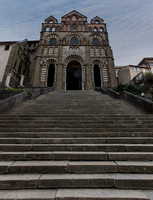