We visited Poland in the summer of 2013. After having arrived from Lithuania we first spend some days in Warsaw. In Warsaw we saw the completely rebuild city center after being bombed to pieces during WWII. From Warsaw we went south towards Krakow. Of course we enjoyed this wonderful very well preserved city with al its hotspots.

In preparation of visiting Auschwitz, which is about an hour drive from Krakow we spend half a day in the museum of Schindler. Yes, this is the Oskar Schindler from the movie Schindlers List. The factory in Krakow still exist and can be seen in the movie and of course in real life in Krakow. Nowadays it is a museum on the Nazi occupation of Krakow. Here we saw what the nazi's did after having conquered Poland. Slightly but surely they brought there horror to the inhabitants of the Jewish getto. After having seen this we went to Auschwitz the next day.

It is located in the small town of Oswięcim, or Auschwitz in German. Many towns here have a Polish and a German name eg Krakow and Krakau.

Before we left for Poland we didn't realize that Auschwitz is not one concentration camp but actually two. Many will know the entrance gate with the words 'Arbeit macht Frei' or maybe the gatehouse through which the train enters the camp. These are two different sites.

Having read our guidebook it said that visiting the old camp is only allowed by guided tour, unless you would arrive very early. We decided to arrive very early and do Auschwitz without a guide. The site would show itself ....

First we went to the 'old' camp. This is the camp named Auschwitz, which in fact are former army barracks. Here you will find the 'Arbeit mach Frei' sign above the entrance. Of course everywhere is the barbed wire around the camp, but I never realized upfront that Auschwitz would consist of stone buildings. So at first glance it didn't give such a very horrible impression. This changed radically after having entered some of the barracks. Some filled with suitcases, some with human hair an other one is full of shoes. Pictures everywhere. Being from Dutch origin we spend some more time in the barrack dedicated to the Dutch victims.

In het old Auschwitz we saw cells, execution sites, a swimming pool (in fact a water supply) and of course the (experimental) gas chambers with the cremation ovens. All in all we were very glad having been here among the first visitors of that day and not being part of a guided tour and stumble upon tourists.

After Auschwitz we took the car for just a few kilometers to visit Auschwitz Birkenau. This is the big camp were extermination was done at an industrial scale. This is the camp with the entrance gate for the trains. Upon exiting the trains some of the prisoners were send directly to the gas chambers, some stayed longer in the camps. The camp itself consist of many many rows of wooden barracks. No luxury here at all, here you will find the horrors of a death camp. Further away form the entrance you will find the remains of the gas chambers. Together with the cremation ovens they were demolished by the Nazi's at the end of WWII. But the scale of the remains of the building shows the scale of the horrors here. There were several of these buildings.

In vicinity of the remains of the gas chambers you can find the monument. Here you will find signs in many languages. The text is something like 'let this place be a cry of despair and a warning to humanity, about 1,5 million people where murdered here'.

When we drove back to Krakow not one of us spoke. A Nazi concentration camp, a world heritage site. At first it may seem to be strange. But bearing in mind this remembrance I fully understand it an totally support it.

This month (January 2015) it will be 70 years ago since Auschwitz was liberated. Many celebreties will attend the moment, among them our King and I happily support it.

Any sales from photos of Auschwitz will be send to the Cancer Society in Holland. 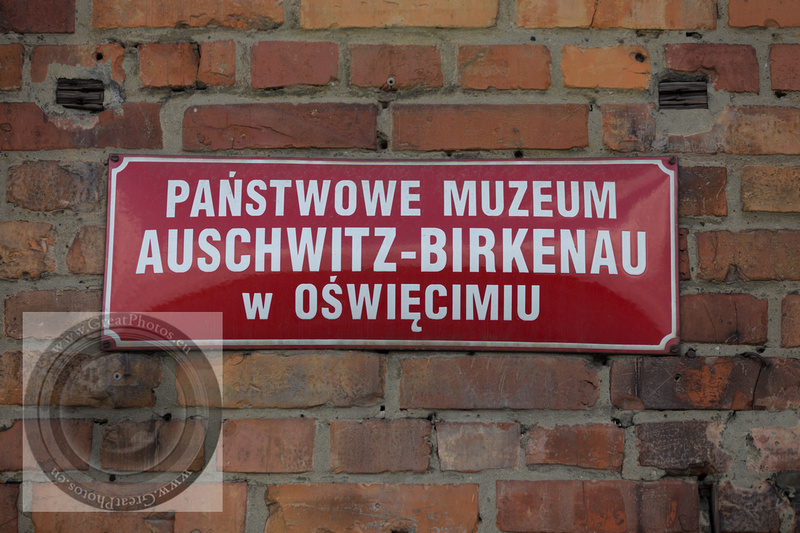