The Sedlec Ossuary in Kutna Hora must be one of the most remarkable World Heritage Sites that I have seen.

When we stayed for a week in Prague, one day I took an early morning train to Kutna Hora, about 1 hour by train from Prague. Upon arrival I walked to the Sedlec Ossuary. This is a small church with graveyard and an exceptional human bone cellar.

Kutna Hora was a populated town due to the silver found here. It competed with Prague from the 13th to the 16th centuries as one of the largest cities in the Czech Republik.  Also one of the crusaders brought back some earth from the holy land and sprinkled this on the cemetery of Sedlec (Sedlec is a suburb of Kutna Hora). Hence this cemetery became a popular burial site. Many thousands and thousand of people have been buried here. When around 1400 a new church was build here all the graves were unearthed and the bones were used and ordered. The bones were stacked and piled from the 16 century on. In the 19th century the bones were placed with the macabre result we see today.

Human skulls and bones are ordered in the shape of chandeliers, monstrances, torches and the coat of arms of the Schwarzenbergs.  The number of skeletons used in the ossuary is somewhere between 40.000 and 70.000! You must have seen it to believe it.

It reminds much of the Capela dos Ossos in Evora in Portugal (another World Heritage Site). Although the skeletons are not used in the shapes found in Sedlec.

When in Sedlec do visit the city of Kutna Hora. It is about 30 minute walk to the town with its fountain, St. Barbara church, the Italian Court and some wonderful houses in the old town. 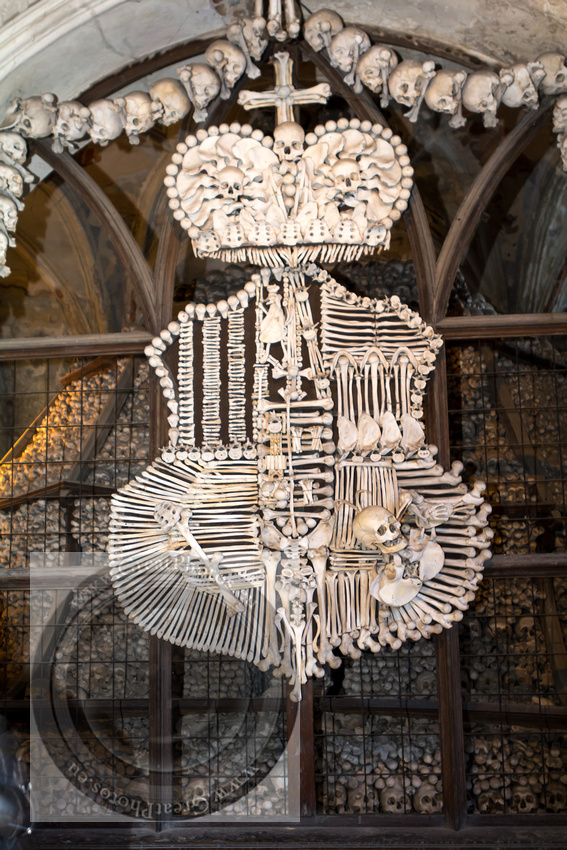