Belfries of Belgium and France

Belfries of Belgium and France

The belfries (belfry or belfort) are towers within the city centre of nearly all towns in Belgium and in the North West of France.  Unesco placed 55 of them on the world heritage list in 1999 (with an extension in 2005). In countries like England, Germany, France, Italy or Spain you will mostly find or donjon's of church towers as the highest building in the village.  The donjon's would represent the power of the landlord, the nobility and the church tower would symbolise the power of the church. Not the Belfort, they represent the power of the aldermen. The more power, the more money the greater the belfry in the town.

So you will find a lot of different building styles and sizes among these belfries. They were build from the 11th until the 17th century. The towers have been used as a watch tower (as being the highest building) for spotting a potential enemy at the gates or to watch over the town to spot possible fires.  These towers were always in the centre and are quite often combined with the town hall. The most important papers of the towns were kept in the belfries. The site should be considered as one although spread over two countries, the locations are quite close and this part of France has been under Dutch influence, many towns still have separate names in Dutch (eg Arras=Atrecht,  Gravelines=Grevelingen, Dunkerque=Duinkerken, Lille=Rijssel or Douai=Dowaai).

On the website you will find photos of all the listed locations of the belfries both in France (23) and in Belgium (32). You will find belfries which our authentic like eg the one in Amiens France or belfries which have been completely rebuild eg Ypres in Belgium. The Belfort of Ypres was destroyed in WW1 and has been meticulously rebuild and houses the great in Flanders Field Museum (www.inflandersfields.be).

Some of the Belfries are rather small like eg Lucheux in France others are large, like eg the 97 meter high belfort of the wonderful town of Mechelen in Belgium. Quite a few are in combination with the city hall like eg Antwerp and others are even the tower of the church eg like the cathedral of Antwerp.  Some of the belfries are really old like Namen in Belgium or Boulogne, while other look like new eg the belfort of Lille. Most of the belfries are one off towers eg like the masterpiece in Douai in France whilst other were inspiration for another building like eg the belfort of Calais which was an inspiration for the architects of the Peace Palace (the International Court of Justice) in The Hague in the Netherlands (www.vredespaleis.nl).

Sometimes it is hard to find to tower of the world heritage site as sometimes there is more then one tower down town eg Roeselare or St Truiden in Belgium or eg Dunkerque, but the Dunkerque has two towers on the list.

Some of the belfries are open for visitors and you can climb all the way up to enjoy the view, like in the 83 meter high Belfort in Brugge (a world heritage site, http://www.greatphotos.eu/brugge). Many belfort still play an important role in the local community and some are the centerpiece of major events like eg the belfort of Oudenaarde in Belgium which is the start of the cycling classic Tours of Flanders (Vlaanderen's Mooiste) (www.rondevanvlaanderen.be).

And there is one belfort which is a part of this world heritage site, the town hall of Brussels in Belgium. But then the Grand Place in Brussels is a world heritage site on its own, so this is also listed (www.greatphotos.eu/grandplace). One might argue that one other belfort should be on the list and this is the belfort of the town of Sluis in the Netherlands. Sluis is very close the Belgium border and this very (http://www.belfortsluis.nl fine example of a belfort could be listed as well

This is overall an world heritage site that might easily be overlooked but it is a site that really represents the area of Flanders and the north west of France.  On this website you will find photos of all the locations. As this website is organized by country you will logically find the French Belfries listed in France in the ones in Flanders in Belgium. 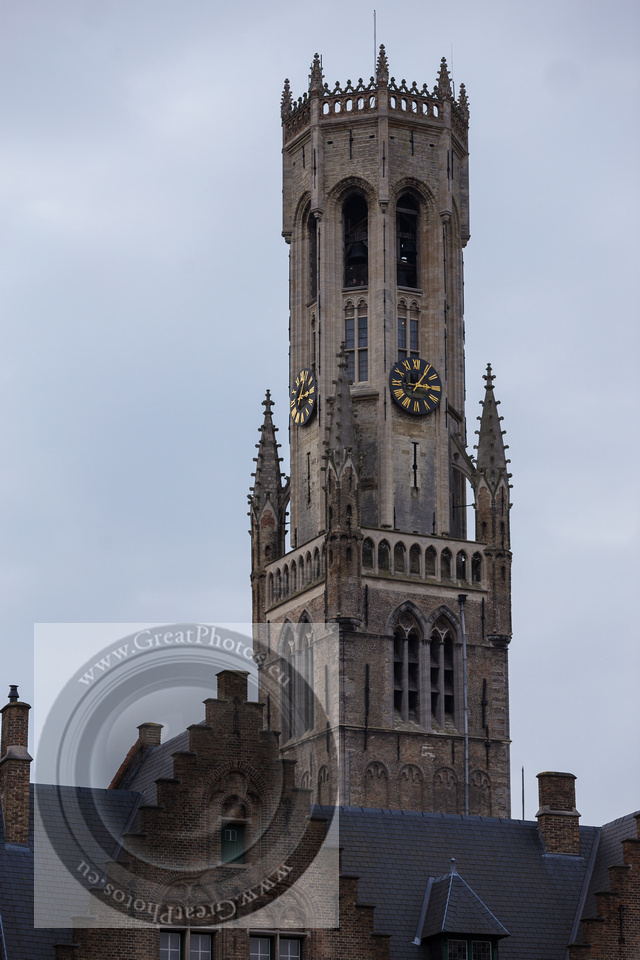