Galleries 32
Collections 0
Groups 0
The Belfries of Belgium and France is a group of 56 historical buildings designated by UNESCO as World Heritage Site, in recognition of an architectural manifestation of emerging civic independence in historic Flandersand neighbouring regions from feudal and religious influences, leading to a degree of local democracy of great significance in the history of humankind.UNESCO inscribed 32 towers onto its list of Belfries of Flanders and Wallonia in 1999. In 2005, the belfry of Gembloux in the Walloon Region of Belgium and 23 belfries from the Nord-Pas-de-Calais and Picardie régions in the northern tip of France were appended to the renamed list. A notable omission is the Brussels City Hall belfry, as it was already part of the Grand Place World Heritage Site.Besides civic belfries, or buildings such as city halls that rather obviously may have rendered a similar service, the list includes religious buildings that also had served as watchtower or alarm bell tower: the Cathedral of Our Lady in Antwerp and the St. Rumbolds Tower in Mechelen Flanders, and the St. Leonard's Church in Zoutleeuw (Flemish Brabant). Few of them are standalone towers; most are connected to larger buildings.

All 32 Unesco listed Belfries of Belgium are featured here. 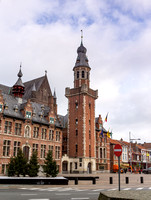